(43) A warning for the digital generation 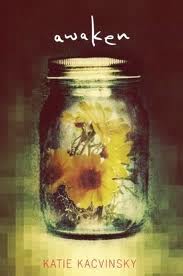 I received an advanced electronic copy of this book through netgalley.com.  It is set to be release May 23, 2011.

Synopsis: Maddie lives in a world where everything is done on the computer. Whether it’s to go to school or on a date, people don’t venture out of their home. There’s really no need. For the most part, Maddie’s okay with the solitary, digital life—until she meets Justin. Justin likes being with people. He enjoys the physical closeness of face-to-face interactions. People aren’t meant to be alone, he tells her.

Suddenly, Maddie feels something awakening inside her—a feeling that maybe there is a different, better way to live. But with society and her parents telling her otherwise, Maddie is going to have to learn to stand up for herself if she wants to change the path her life is taking.

In this not-so-brave new world, two young people struggle to carve out their own space.

Review: This book is a warning to the digital generation.  A fictionalized warning similar to the Winter of our Disconnect

but aimed at the younger generation.  In Maddies world everything is digital, school, college, walks, dances.  You never need to leave your house.  Dates are virtual and people meet online instead of in person.  Sound familiar?  Thats what this world is coming to.

When Maddie meets Justin he teaches her to disconnect, to live in the world and interact with real people instead of virtually and she realizes what she's been missing.  She Awaken's from her digital coma and realizes that while her head has been stuck in a screen life has been going on around her.

What an enormous wake up call for this generation! How often do you find yourself checking your phone when you are out? Even at the gym there are tons of TV's to stimulate you while you work out. We are rarely without some type of technology.  We interact through facebook and dating sites instead of going out and actually interacting in person.  People hide behind their digital persona's believing that they can be someone different than who they are when they are online, but why? Whats wrong with who you are? And if you don't like it, hiding isn't going to change it.  I wonder if the surge in depression is a result of our digital addiction, kids don't know how to play without an electronic device.  What happened to board games and imagination?

Awaken is a wake up call for us all and following Maddie's enlightenment makes you think about how you live your life, or really how you don't.