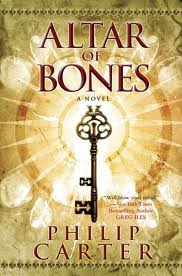 
Synopsis: "They didn’t have to kill him…He never drank from the altar of bones.” Cryptic dying words from a murdered homeless woman in present-day San Francisco unlock a long-buried secret that alters history. Now, a pair of ruthless assassins are sent to cut the few living “loose ends.” And a young, resourceful woman on the run encounters a determined man with his own connected past and vengeful agenda. Forced to partner for survival and answers, a fast-paced and deadly game of cat and mouse ensues, whisking the duo from the winding streets of Paris to the faded palaces of Budapest to the frozen lakes of Mongolia...where destiny, passion, and further betrayal await them.

Review: Ancient secrets, hidden treasures, and the fountain of youth all things that people would kill to learn more about.  The secret of the Altar of Bones has been kept by Zoe's family for generations, but Zoe has never heard of it.  A murdered homeless woman who she finds out is her grandmother who she thought had been dead  for years leaves her a cryptic note and clues to find a treasure that others will kill for.

Ry, an undercover DEA agent comes home from an assignment to find that his father is dead, and has told his brother an impossible tale of treason and murder. Before he can find out more assassins attempt to kill him leading Ry fighting for his life and into Zoe's path where they must fight for survival together and discover the location and the secret of the Altar of Bones, and who is trying to kill them for it.

Fast paced, with great twists and turns this was a great read.  What would you do if you found the fountain of youth but with long life also came insanity...would you still drink?