(60) The Killing of the Tinkers 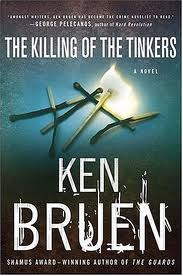 Synopsis: When Jack Taylor blew town at the end ofThe Guards his alcoholism was a distant memory and sober dreams of a new life in London were shining in his eyes. In the opening pages of The Killing of the Tinkers Jack's back in Galway a year later with a new leather jacket on his back, a pack of smokes in his pocket, a few grams of coke in his waistband, and a pint of Guinness on his mind. So much for new beginnings.

Before long he's sunk into his old patterns, lifting his head from the bar only every few days, appraising his surroundings for mere minutes and then descending deep into the alcoholic, drug-induced fugue he prefers to the real world. But a big gypsy walks into the bar one day during a moment of Jack's clarity and changes all that with a simple request. Jack knows the look in this man's eyes, a look of hopelessness mixed with resolve topped off with a quietly simmering rage; he's seen it in the mirror. Recognizing a kindred soul, Jack agrees to help him, knowing but not admitting that getting involved is going to lead to more bad than good. But in Jack Taylor's world bad and good are part and parcel of the same lost cause, and besides, no one ever accused Jack of having good sense.

Review: What do you know another drunk detective...but unlike Harry Hole, from Redbreast by Jo Nesbo Jack doesn't go on the wagon. In fact he is so deeply under the wagon I'm surprised he functions.  Every time he wakes up without a hangover he is stumped.  Fast paced, hard hitting and dark this Irish mystery can leave you scratching your head if you don't know or can't pick up some of the slang. I'm really trying to like Jack but its difficult, he is almost beyond redemption in his spiral downward. Even his friends are a quirky mess.

Jack is approached by the head of the Gypsy's to help solve the murders of several of his kin because the police don't seem to care.  Of course this plunges Jack into a crazy and unfortunate series of events that leaves him even more broken, and on the edge. I don't feel sorry for Jack and by the end of the book I am almost starting to like him.  I'm not really sure about this series...I guess I will have to take a few more books about Jack for a spin before I make up my mind.