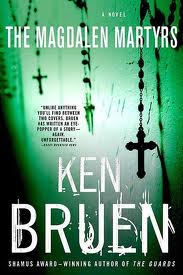 Synopsis: Jack Taylor is walking the delicate edge of a sobriety he doesn't trust when his phone rings. He's in debt to a Galway tough named Bill Cassell, what the locals call a "hard man." Bill did Jack a big favor a while back; the trouble is, he never lets a favor go unreturned.
Jack is amazed when Cassell simply asks him to track down a woman, now either dead or very old, who long ago helped his mother escape from the notorious Magdalen laundry, where young wayward girls were imprisoned and abused. Jack doesn't like the odds of finding the woman, but counts himself lucky that the task is at least on the right side of the law.

Until he spends a few days spinning his wheels and is dragged in front of Cassell for a quick reminder of his priorites. Bill's goons do a little spinning of their own, playing a game of Russian roulette a little too close to the back of Jack's head. It's only blind luck and the mercy of a god he no longer trusts that land Jack back on the street rather than face down in a cellar with a bullet in his skull. He's got one chance to stay alive: find this woman.

Unfortunately, he can't escape his own curiosity, and an unnerving hunch quickly turns into a solid fact: just who Jack's looking for, and why, aren't nearly what they seem.

Review: I thought I would spend a little more time with Jack Taylor and I'm not sure I'm happy I did. This series is dark and not in a spooky, creepy kind of way, just a sad, lonely depressing kind of way.  I'm not sure how much longer I can stomach this series but I have two more books so I will tackle those and hope there is some redemption.

Jack is a broken man, and if the alcohol doesn't kill him, someone else surely will.  He used to be a good cop now he just stumbles through life making drastic mistakes and taking drastic measures to clean up his mess.  That's how he became indebted to Bill Cassell in the first place.

The Magdalen story line is very interesting - The Magdalen Martyrs were unwed mothers who were placed in a Franciscan home until they had their babies.  They were routinely tortured and beaten as sinners and the worst offender was a woman they called Lucifer.  Jack is charged with finding a woman who used to work in this home.  Throughout the book are little stories about what went on in the home which were sad and dark but gave the story depth between the drunken, drug induced binges.

All in all I felt this one was better than the last two - the pacing was better and it wasn't as all over the place.