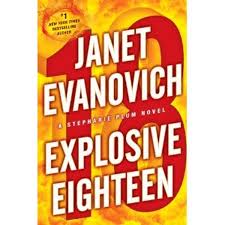 Synopsis: Before Stephanie can even step foot off Flight 127 Hawaii to Newark, she’s knee deep in trouble. Her dream vacation turned into a nightmare, and she’s flying back to New Jersey solo. Worse still, her seatmate never returned to the plane after the L.A. layover. Now he’s dead—and a ragtag collection of thugs and psychos, not to mention the FBI, are all looking for a photograph he was supposed to be carrying.

Only one person has seen the missing photo: Stephanie Plum. Now she’s the target. An FBI sketch artist helps Stephanie re-create the person in the photo, but Stephanie’s descriptive skills are lacking. Until she can improve them, she’ll need to watch her back.

Over at the bail bonds agency things are going from bad to worse. Vinnie’s temporary HQ has gone up in smoke. Stephanie’s wheelman, Lula, falls for their largest skip yet. Lifetime arch nemesis Joyce Barnhardt moves into Stephanie’s apartment. And everyone wants to know what happened in Hawaii?

Review: The word that always comes to mind after reading a Stephanie Plumb book is mind candy.  There really is no substance just wacky fun.  The characters are like your favorite pair of pants that are broken in, in all the right places.  The problem is that they are getting worn pretty thin.  I really need her to throw a wrench in the works.

After 18 books that are pretty much all the same.  Bumbling bounty hunter bungles captures, eats lots of cluck in the bucket and tools around with her sidekick Lula, and is caught between hunky Morelli the cop and spicy dangerous Ranger the ex special forces bounty hunter. Oh and did I mention everyone who seems to be on her capture list is crazy?  They are all quirky and nuts.  This book was just as fun but I would like something new to happen.  Which I'm hoping was briefly foreshadowed in this book when she realized she may have goofed on her birth control! A baby Plum would be an interesting addition...not to mention she probably doesn't know whose kid it would be...flip a coin, Ranger or Morelli
Labels: Janet Evanovitch lula morelli new jersey ranger stephanie plum