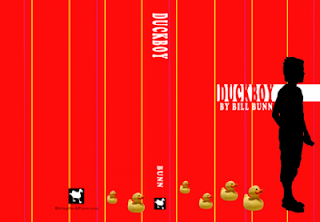 This title is due to be released on October 20, 2012.  I received an electronic ARC of this book through netgalley.com

Synopsis: Steve is a 14 year old boy whose mom disappears. The police are called in and conclude that she has left the family – run away. Everything falls apart for him after that. School is a disaster--he's failing his classes, and ever since an ill-fated attempt to save a bird from a frozen pond, bullies call him "Duck Boy."

During the first Christmas since his mother’s disappearance, Steve’s dad has to travel for work, just to keep his job, and Steve is forced to stay with his Great Aunt Shannon. Aunt Shannon introduces Steve to alchemy, and shows him that alchemy may have caused his mother's disappearance. Then his great aunt disappears while she is experimenting.

Steve begins his own experiments, and finds his philosophers stone, and through an accident discovers that the two most important women in his life have gotten lost in an in-between dimension. In order to save them, he must keep his promise to the lord of the “world of pieces” and give himself to the world. Steve decides to jump into the world to keep his promise quickly and completely, just as he did when he saved the duck. He finds that instead of dissolving him, the alternate dimension is now at his command.

Review: This is a great story about a misfit boy whose world is turned upside down when his mother disappears. His father is distraught and doesn't know how to cope and so the two of them are just floundering through life, until Steve is sent to stay at his Great Aunt's house for Christmas. That's when his world changes.

Through his fantastical adventure to save his mother, his Great Aunt and a new friend Steve finds his inner strength and his self esteem.  He learns that he has skills that not everyone else has and his determination and will are stronger than he ever thought.