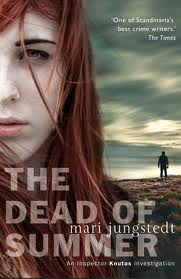 I received this title as an e-galley from netgalley.com It was released on May 3, 2012

Synopsis: The most isolated island in the Baltic Sea, Gotska Sandön, north of Gotland, serves as the setting for her perfect crime story.  A husband and father of two is mysteriously murdered while on holiday, taking a morning jog.  With no evidence of a motive or suspect, assistant commissioner Karin Jacobsson is assigned to her first major case to lead the investigation while her boss, Superintendent Anders Knutas is away on holiday. Meanwhile, TV reporter Johan Berg keeps pace with the police team, while at the same time distracted in trying to win back his former love and the mother of his child, Emma, who resides on the island.

Review: While I really enjoyed this book I wasn't quite sure who the main character was.  The book really focuses on so many characters. I believe the police man Knutas was supposed to be the main player,  but there were so many other more intriguing characters that he sort of got lost.  I was more drawn into the story of Johan Berg the TV reporter who seemed to be one step ahead of the police and the Assistant Commissioner Jacobsson whose power is given a back seat when her boss Knutas returns from vacation early.

This is your typical slower paced Scandinavian mystery.  There is no clean wrap up at the end, the characters are all flawed, and while you know that something happened in the past to spark these murders you aren't quite sure what.  I almost feel like many of these books are more character studies with the mystery as secondary.  Either way its a very enjoyable read.