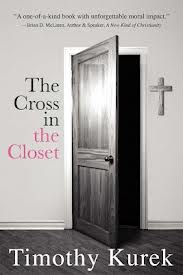 Synopsis: Timothy Kurek, raised within the confines of a strict, conservative Christian denomination in the Bible Belt, Nashville, Tennessee, was taught the gospel of separation from a young age. But it wasn't long before Timothy's path and the outside world converged when a friend came out as a lesbian, and revealed she had been excommunicated by her family. Distraught and overcome with questions and doubts about his religious upbringing, Timothy decided the only way to empathize and understand her pain was to walk in the shoes of very people he had been taught to shun. He decided to come out as a gay man to everyone in his life, and to see for himself how the label of gay would impact his life. In the tradition of Black Like Me, The Cross in the Closet is a story about people, a story about faith, and about one man's "abominable" quest to find Jesus in the margins.

Review: Timothy made a brave journey that not only showed him what it was like to be gay but also what it was like to be in the closet as he hid his true heterosexual identity from his family and the others that he met.  Similar to Morgan Spurlock's experiments in his movie Super Size Me and his TV show 30 Days: The Complete Series  Timothy decided to "come out" to his family and friends and live as a gay man for 1 year to answer questions for himself about who he was as a person, his faith and how it fit with loving your neighbor as you love yourself.

Timothy doesn't gloss over his struggle.  He reveals how he belittled gay people when he was younger thinking he was better, how he hid behind his religion and the scripture but never really sat down to understand it.  Timothy's journey was not an easy one.  He had to overcome his prejudice and open his eyes and his heart to learning more about himself as a person and who he wishes to be. This is a riviting read - I can see how some critics may say that he was swayed by the devil or even the "gay agenda". But I believe that in opening his eyes and his heart he may have learned a more about humanity, hate, prejudice and compassion than he ever could have before.

Timothy shows us his journey through dialogue fights with himself. In these he reveals how his feelings changed from one of being bigoted against gay and lesbians to one of being bigoted toward conservative Christians and then finally finding a middle ground of love and acceptance of all people.  Bravo Tim, your journey can teach us all a thing or two.
Labels: Christianity conservative christian cross in the closet lgbt religious awakening