Book Review: Half a World Away 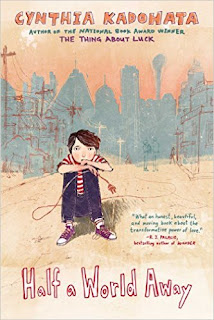 Synopsis: Eleven-year-old Jaden is adopted, and he knows he’s an “epic fail.” That’s why his family is traveling to Kazakhstan to adopt a new baby—to replace him, he’s sure. And he gets it. He is incapable of stopping his stealing, hoarding, lighting fires, aggressive running, and obsession with electricity. He knows his parents love him, but he feels...nothing.

When they get to Kazakhstan, it turns out the infant they’ve traveled for has already been adopted, and literally within minutes are faced with having to choose from six other babies. While his parents agonize, Jaden is more interested in the toddlers. One, a little guy named Dimash, spies Jaden and barrels over to him every time he sees him. Jaden finds himself increasingly intrigued by and worried about Dimash. Already three years old and barely able to speak, Dimash will soon age out of the orphanage, and then his life will be as hopeless as Jaden feels now. For the first time in his life, Jaden actually feels something that isn’t pure blinding fury, and there’s no way to control it, or its power.

(76)Review: This was a great book that really got into the head of a 12 year old boy who was adopted at the age of 8 from Romania.  Jaden is having a hard time adjusting to his new home, he is angry with his birth mother, wants to love his adoptive parents but struggles with it.  He is sad he had to leave Romania and is angry with his adoptive parents for taking him away but also knows that they love and care for him.  He struggles with attaching and loving them expecting them to betray him.

Ms. Kadohata was able to really get inside the head of a boy struggling with attachment, the different emotions building up inside him and allows you to see things from his perspective.  When the family travels to Kazakhstan to adopt another child Jaden's feelings really rise to the surface as he believes he is not good enough and that is why his adoptive parents want another child.  His insights into the orphanage children and baby they are adopting is poignant and touching.  He relates to them, he knows what it is like to live in an orphanage.  He knows what it is like to feel hopeless.

Beautifully written Ms. Kadohata has really strongly developed characters and a great story that has you really living in Jaden's skin.  You want him to feel, you want his wall to crack, and you feel his pain as he struggles with it.  This would be a great book for anyone adopting an older child either through the foster care system or internationally as Jaden's character is very easy to relate to.