Book Review: Which one of you is the Mother? 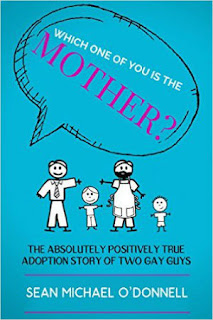 Synopsis: After fifteen years of up-all-night gay disco dance parties, Sean O'Donnell and his longtime partner Todd decided to trade in their leather chaps for mom jeans and start a family. In August 2012 the not-so ambiguously gay duo walked into a Pittsburgh-based adoption agency and said, "We'd like a child, please." For the next several months they attended parenting classes, subjected themselves to probing FBI background checks, and completed enough paperwork to reforest the whole of the Amazon River basin. Despite lacking a magical baby-making vagina the pair successfully made omelets without eggs when in July 2013 they flew to Oregon to meet their seven-year-old son for the first time. No longer Sean and Todd they would now be forever known as Dad and Papa to the observant boy ("So that's how you sleep.") with a million questions (“Do you have a girlfriend?”, “Where do babies come from?”, “What’s gay?”) No sooner had they settled into their new roles when the stork returned the following year, delivering another boy who quickly proved that five-year-olds were basically talking babies who could use the toilet. Which One of You is the Mother? is the story of how two gay guys finally met the two kids who were always meant to be their sons. This is a book that celebrates a different kind of family who just happens to be like every other family on the block. Only gayer. And funnier.

Review: This is a quick often laugh out loud funny collection of essays written by Sean O’Donnell about how his life changed after adopting two children through foster care.  He touches on the hoops they had to jump through, some of the feelings they encountered at having to choose certain criteria in their children, and how it felt not knowing the past of these two wonderful kids that are now part of their family. Parenting changes you, and your life and Sean O’Donnell has some amazing insights into how wonderful and underappreciated some of them are.  If you are looking for something light but with some insight this is a good choice.

Labels: adoption foster care lgbt parenting Sean O'Donnell Which one of you is the mother