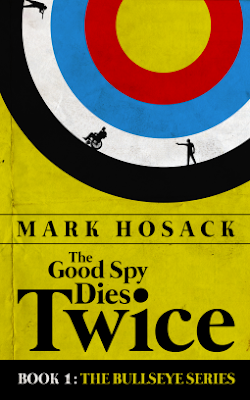 Jake Boxer, investigative journalist and host of the conspiratorial news show Bullseye, is in serious trouble. Not only is his soundman murdered by Russian intelligence agents while reporting on a secretive New World Order, but his network cancels his show, leaving Jake humiliated and spiraling into a deep dark depression.

Years later, a condemned murderer, who claims he was abandoned by the CIA, and who starred in an early episode of Bullseye, is finally executed for killing two supposed Soviet spies back in the 1970’s.

Jake Boxer, still trying to piece his life back together, is on his honeymoon in a posh ski resort in the Alaskan mountains when he gets word of the inmate’s execution . . . and the old killer’s final words: “The good spy dies twice.”

Those five words, seemingly meant for Jake, draw the ex-reporter out of his forced retirement and into a complex and deadly global conspiracy involving his newlywed wife, the secretive New World Order, and the hotel’s hundred or so “guests.”

Everyone is a suspect.


I wasn't too sure about this book wondering if it was going to be a cheesy spy story but I found myself really sucked in.  This is a great espionage thriller.  Jake Boxer had a public meltdown on his tv show Bullseye.  Since then he has been trying to pull himself out of a deep depression, figure out what he is going to do with the rest of his life. After marrying his ex-producer, he travels to a posh ski resort in remote Alaska. It is there that Jake's life will forever be altered again.

Everyone in this book feels like a suspect and you can't really get a good handle on what is happening until the ending.  Fantastic writing that keeps you guessing and pulling you along.  It takes a good writer to not have me figuring everything out before the final page and this one definitely kept me guessing.  There is a whole lot to this book much more than meets the eye.

Wonderful edge of your seat ride.

Disclaimer: I received an advanced copy of this book from the publisher through netgalley in exchange for an honest review.
Labels: Mark Hosack mystery The Good Spy Dies Twice