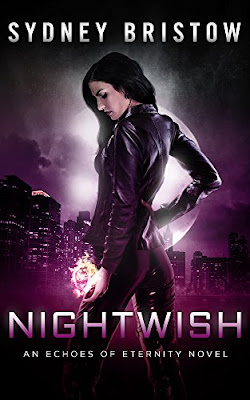 In this world, nothing is certain except death and sarcasm!

Serena Sykes was still trying to figure out her place in the world when she discovered the existence of magic. Now armed with limited magical powers, she'll have to stop her newly discovered family from destroying the world.

With only 48 hours before they fill the world with monsters, Serena will have to rely on a vampire who is as much friend as foe, while trusting in the wisdom of her dementia-ridden grandmother.

No one said saving the world would be easy!


Serena doesn't know she is a witch until her 21st birthday when she discovers her powers, then she discovers she has a twin sister, a niece and a psychotic mother who gave her away because she was annoying.  Raised by her grandmother Serena can't even ask why she was never told about her family but her grandmother has Alzheimer's and rarely has a lucid moment.

Now she finds herself in a magic battle with her mother and her sister along with trying to protect her niece and missing the one person who was always there for her. Her friends try to help but she isn't always certain who she can trust.

This was an action packed book that was a good set up to a new trilogy. I could have used a little less sarcasm since there were times I found myself thinking okay I get it enough already, but the premise and the story kept me going.  Serena and her best friend Kendall are great, the male supporting characters could use a bit of work, they all seemed flawed with the exception of Nolan who was flawed in other ways but I hope to see more of him in future books.

People who like the Sookie Stackhouse books and even Janet Evanovich's number series would appreciate this book.  The monsters and supernatural element combined with the newbie inexperience lead to some interesting interactions.

Disclaimer: I received a free copy of this book from the author in exchange for an honest review.