Book Review: No Rest for the Wicked by Dane Cobain 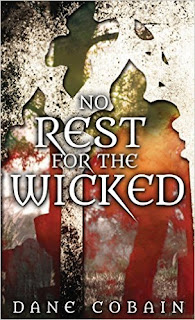 When the Angels attack, there’s NO REST FOR THE WICKED. Father Montgomery, an elderly priest with a secret past, begins to investigate after his parishioners come under attack, and with the help of Jones, a young businessman with an estranged child, Montgomery begins to track down the origin of the Angels. The Angels are naked and androgynous. They speak in a dreadful harmony with no clear leader. These aren’t biblical cherubs tasked with the protection of the righteous – these are deadly creatures of light that have the power to completely eradicate. When Jones himself is attacked, Father Montgomery knows he has to act fast. He speaks to the Angels and organizes a final showdown where he’s asked to make the ultimate sacrifice.

This was an interesting book, unlike anything else I've read.  Angels are not "good" they feed off the fear and anger of humans.  As these creatures wage a war on the human race two men attempt to find out where they come from and how to stop them.

CERN is a research facility that is trying to prove or disprove the existence of God.  Through science they unleash these creatures on earth.  There really isn't a lot of back story on CERN or why they decided to do this or why they don't get involved in stopping the Angels which I found to be a huge missing piece.  The back story of Father Montgomery and Jones is interesting and ultimately important but I think that giving us some background on CERN would have made the story flow better.  I felt it skipped around a bit and sometimes left me wondering if I had missed something.

Overall this story is unique, the writing is well done and the ending is satisfying if not a bit predictable.

Disclaimer: Book was received from the author in exchange for an honest review.
Labels: Angels Dane Cobain No Rest for the Wicked Priests