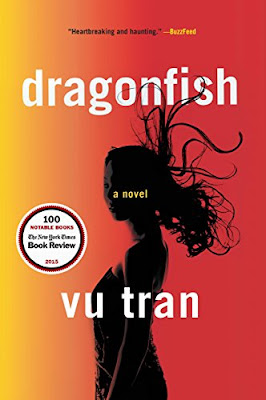 Robert, an Oakland cop, still can't let go of Suzy, the enigmatic Vietnamese wife who left him two years ago. Now she's disappeared from her new husband, Sonny, a violent Vietnamese smuggler and gambler who's blackmailing Robert into finding her for him. As he pursues her through the sleek and seamy gambling dens of Las Vegas, shadowed by Sonny's sadistic son, "Junior," and assisted by unexpected and reluctant allies, Robert learns more about his ex-wife than he ever did during their marriage. He finds himself chasing the ghosts of her past, one that reaches back to a refugee camp in Malaysia after the fall of Saigon, as his investigation soon uncovers the existence of an elusive packet of her secret letters to someone she left behind long ago. Although Robert starts illuminating the dark corners of Suzy’s life, the legacy of her sins threatens to immolate them all.

There is no doubt that Vu Tran has a promising career ahead of him.  He can write vivid beautiful scenes and dark and dangerous ones. However I was left a little lost in this book.  Written with alternating chapters, one by Robert the cop pushing boundaries to find his ex-wife and one from someone writing in a diary.  At first I thought this diary entry was from Suzy's mother but then I realized it was actually Suzy herself who was writing her story of fleeing Vietnam, surviving the boat ride, and ultimately ending up in America.

I think my problem with the book is the motivation behind everyone to find Suzy, she is emotionally unstable, aggressive, and elusive.  She creates turmoil and tension in those around her. I understand that is what probably draws people to her initially but I think it would be a sigh of relief when she finally left.

This is definitely a very noir novel, from the cop who finds himself sinking deeper and deeper into the dark underworld to the missing woman and Suzy's violent husband who is blackmailing Robert into helping to find her. I guess I just expected a bit more and the ending was unsatisfying and left things still shrouded in mystery.  There was a lot to like about the writing but I just wasn't a huge fan of the story.