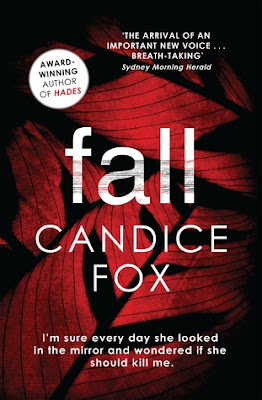 If Detective Frank Bennett tries hard enough, he can sometimes forget that Eden Archer, his partner in the Homicide Department, is also a moonlighting serial killer . . .

Thankfully their latest case is proving a good distraction. Someone is angry at Sydney's beautiful people - and the results are anything but pretty. On the rain-soaked running tracks of Sydney's parks, a predator is lurking, and it's not long before night-time jogs become a race to stay alive.

While Frank and Eden chase shadows, a different kind of danger grows closer to home. Frank's new girlfriend Imogen Stone is fascinated by cold cases, and her latest project – the disappearance of the two Tanner children more than twenty years ago – is leading her straight to Eden's door.

And, as Frank knows all too well, asking too many questions about Eden Archer can get you buried as deep as her past …

I was so excited when I saw there was a third book in the Archer/Bennet Series but my excitement was dashed when I found it wasn't available in the USA right now.  I wrote to a family member in Australia to send me a copy and I'm glad I did.

Eden and Frank's relationship is strained due to his growing knowledge of what Eden likes to do when she isn't working as his partner detective. Eden is struggling to recover from her near fatal injuries and fighting off growing suspicions that Frank's girlfriend is putting her nose where it shouldn't be. This book also introduces us to Hooky, a computer genius whose family was killed by her sister. Hooky is only 17 but helps the police investigate pedophiles on the internet.  She also has a almost fatherly relationship with Frank and his girlfriend isn't too pleased with it.

So while Frank navigates all these females in his life he is also on the hunt for a killer who is drugging and killing runners in the park in a very personal way.  How are they connected, who could be doing it?

Fox's characters are dark, dangerous and fantastic.  There are so many layers to them. Just when you think you have one pegged something else happens to realize you may be giving them too much credit for being human and the funny thing is the most ruthless character of them all Eden's father, Hades, seems to be the most human.

This book leaves us with a doozy of an ending that leaves me really wondering what comes next for these characters.  I know that the author is set to publish the first in a new series early this year, but I hope she doesn't let us stew too long waiting for answers on what becomes of our warped but fascinating friends in this series.