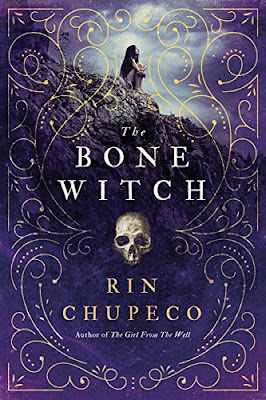 In the captivating start to a new, darkly lyrical fantasy series, Tea can raise the dead, but resurrection comes at a price...

When Tea accidentally resurrects her brother from the dead, she learns she is different from the other witches in her family. Her gift for necromancy means that she's a bone witch, a title that makes her feared and ostracized by her community. But Tea finds solace and guidance with an older, wiser bone witch, who takes Tea and her brother to another land for training.

In her new home, Tea puts all her energy into becoming an asha-one who can wield elemental magic. But dark forces are approaching quickly, and in the face of danger, Tea will have to overcome her obstacles...and make a powerful choice.

I really wasn't sure what to expect from this book but I was drawn in immediately.  The story goes back and forth between present day as Tea talks to the Bard who has come to learn her story and the past when Tea first learned that she would become a Dark Asha.

Chupeco has created a rich world with many layers and political intrigue.  Magic is common but the gift of the Dark Asha is looked at with fear and disdain. Tea's back story is interesting and slowly builds you up to present day.  You watch her grow from a scared 12 year old who accidentally raises her brother from the dead to a skilled kick ass woman at 17.

As the story unfolded I became more and more invested in the characters and really wanted to get to know a few of them a bit more.  Since this is the first book in a series I'm hoping that more will come from some of these other characters that Chupeco has given us a taste of.

Everyone in this world has a heartglass and the color of the glass tells you how you feel and also determines what you will be.  There doesn't seem to be any room for someone to make choices of free will in this world since you are pushed in the direction your heartglass leads you.

There are many different themes throughout the book that really seem directed at following your own heart and not so much what society thinks you should do.

I really liked this book and look forward to the rest of the series.

Disclaimer: I received an advanced copy of this book from the publisher through netgalley.com in exchange for an honest review
Labels: Rin Chupeco The Bone Witch ya