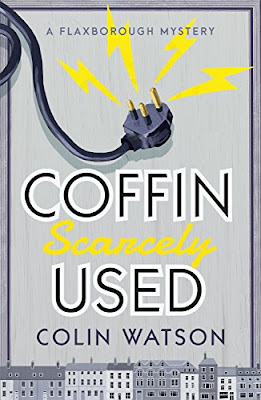 In the respectable seaside town of Flaxborough, the equally respectable councillor Harold Carobleat is laid to rest. Cause of death: pneumonia.

But he is scarcely cold in his coffin before Detective Inspector Purbright, affable and annoyingly polite, must turn out again to examine the death of Carobleat’s neighbour, Marcus Gwill, former prop. of the local rag, the Citizen. This time it looks like foul play, unless a surfeit of marshmallows had led the late and rather unlamented Mr Gwill to commit suicide by electrocution. (‘Power without responsibility’, murmurs Purbright.)

How were the dead men connected, both to each other and to a small but select band of other town worthies? Purbright becomes intrigued by a stream of advertisements Gwill was putting in the Citizen, for some very oddly named antique items…

Originally published in 1958 these are being re-released. This is a well crafted British mystery, and while its a bit dated it still holds its own.  Detective Purbright and Love keep you moving along in this mystery while they slowly uncover the details of murder in the sleepy little town of Flaxborough.

The characters are well done, and the tale has a bit of whimsy to it as well as interesting detective work.  I read so many modern tales that its interesting to see how things were done with out the forensics we rely so much on today.

I'm glad they decided to republish them, its interesting to read how so many things have changed yet remain the same. This is an interesting witty mystery that will have you smirking and turning pages.