Audio Book Review: Everything I Never Told You by Celeste Ng 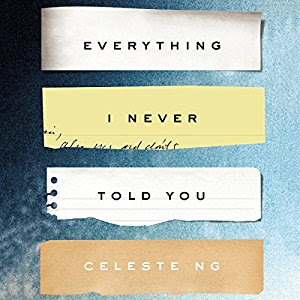 Lydia is dead. But they don't know this yet....

So begins the story in this exquisite debut novel about a Chinese American family living in a small town in 1970s Ohio. Lydia is the favorite child of Marilyn and James Lee; their middle daughter, a girl who inherited her mother's bright blue eyes and her father's jet-black hair. Her parents are determined that Lydia will fulfill the dreams they were unable to pursue - in Marilyn's case that her daughter become a doctor rather than a homemaker, in James' case that Lydia be popular at school, a girl with a busy social life and the center of every party.

When Lydia's body is found in the local lake, the delicate balancing act that has been keeping the Lee family together tumbles into chaos, forcing them to confront the long-kept secrets that have been slowly pulling them apart. James, consumed by guilt, sets out on a reckless path that may destroy his marriage. Marilyn, devastated and vengeful, is determined to find a responsible party, no matter what the cost. Lydia's older brother, Nathan, is certain the neighborhood bad boy Jack is somehow involved. But it's the youngest of the family, Hannah, who observes far more than anyone realizes - and who may be the only one who knows the truth about what happened.

We know from the very beginning that Lydia is dead...the question is why and how. Through flashbacks we learn about her mother Marilyn, her father James and what it means to be different in a world that expects you to look like everyone else.  Her father is fighting demons from when he is a child, the only Chinese child in the class, how he longed to fit in, Marilyn had been in college when she met James, focused on being a doctor but instead got married and dropped out of school.  Each of them hides a deep pain that guides their actions, their selfish drive to mold their children in to what each of them wished they had been.

Lydia grows up to be the peacemaker, the person who tries so hard to hold her parents together and keep the family happy.  She always puts her parents wants and needs above her own, until she can't anymore. Nath is ignored or put down for not being the son James thinks he should be. Hannah, is just ignored and yearns for attention.

This is a well written book that describes the pain of being different, how parents often force their own wants and needs and expectations on their children instead of seeing them for who they really are and the anxiety of just being a teen. The narrator did a good job of portraying each character and bringing the story to life.

Discover other books or products I like: https://www.amazon.com/shop/readinggrrl
Labels: Celeste Ng Everything I Never Told You multi-ethnic families multi-racial family