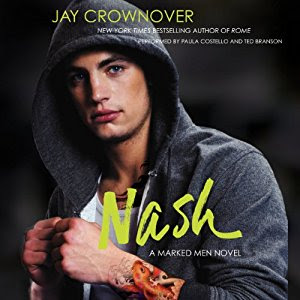 Saint Ford has worked hard to achieve her childhood dream of becoming a nurse. Focused on her work and devoted to her patients, there's no room for love. She doesn't need a guy making waves in her calm, serene life - especially when he's the unforgettable hottie who nearly destroyed her in high school. Dark, brooding Nash Donovan might not remember her or the terrible pain he caused. But he turned her world upside down...and now he's trying to do it again.

Saint has no idea that Nash isn't the cocky player he once was. Uncovering a devastating family secret has rocked his world, and now he's struggling to figure out his future. He can't be distracted by the pretty nurse he seems to meet everywhere. Still, he can't ignore the sparks that fly between them - or how she seems so desperate to get away from him. But the funny, sweet, and drop-dead gorgeous Saint is far too amazing to give up on - especially since she's the only thing in his life that seems to make sense.

When Nash discovers the truth about their past, he realizes he may have lost her heart before he could even fight for it. Now, Saint has to decide: Is Nash worth risking herself for all over again?


Nash is the rock of his group of friends.  He is the one who holds everyone together.  He is devastated by finding his Uncle Phil passed out on the floor of his cabin only to discover that Phil has been hiding stage 4 lung cancer from him and another big secret that is sure to rock his world.  Saint works as a nurse in the ER and ran into Nash when he came to help his friend Rome out when he got beat up by a bunch of bikers.  Nash remembers Saint from high school as the pretty girl who was way out of his league, but Saint has a different version.  Saint believes that Nash betrayed her, at a high school party, never found her attractive and was a bully.

Can these two find a way to put the past behind them and come together? Will Saint ever trust Nash not to betray her for the first pretty piece of ass that walks by? A rough time in middle and high school can often leave people scarred and broken, just like Nash and Saint.  Only when we let go of the past and start living in the present can we really break free of the pain.

Once again hot sexy tattooed and pierced men will leave you breathless and wanting.  Well done.

Discover other books or products I like: https://www.amazon.com/shop/readinggrrl
Labels: A marked Men novel Jay Crownover Nash