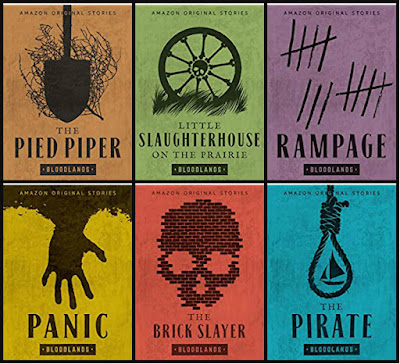 A heinous history of America: Six short stories exploring the dark heart of US history, true-crime master Harold Schechter reveals six sensational but nearly forgotten acts of carnage and bloodlust that shocked the nation. From a diabolical Kansas family down the road from Laura Ingalls Wilder to an Elvis-inspired “rebel” to the country’s first mass shooter, these chilling criminals dominated the headlines—and nightmares—of their day.

Each is a short book or hour or so audio.  I listened to the stories as each of the kindle versions come with audio.  So if you are a kindle unlimited member you will be able to read or listen to each of these for free.

Each book is dark and fact filled story about several little known sensational acts of violence that happened in America.

Pied Piper: Charismatic serial killer whose friends follow him regardless of his relentless quest to kill.

Little Slaughterhouse - At a remote little inn not far from the Kansas homestead of Laura Ingalls Wilder lived the Bender family. These pioneers welcomed unwary visitors with jackrabbit stew and a sledgehammer to the skull. In time, their apple orchard gave up its secrets—a burial ground for their mutilated victims, each stripped of their possessions.

Rampage: In 1949, things like this just didn’t happen: A quiet New Jersey resident took a morning walk with a 9 mm Luger pistol. In twelve minutes he murdered thirteen neighbors…and then went back to bed.

Panic: During the Depression, economic anxieties found an outlet in a series of child murders that triggered an irrational nationwide hysteria: pedophiliac psychopaths were overrunning the country.

As America was brought to rage and fury by the press and the FBI, lynch mobs took to the streets, reason gave way to doomsday scenarios, and one father was even driven to murder his three daughters to “save them” from a degenerate crime wave.

The Brick Slayer: the story of a young black man Robert Nixon who was accused and convicted of killing several women with a brick. The crime was the basis of Native Son by Richard Wright. Robert Nixon was abused in custody and later confessed to many of the crimes he was accused. Nixon was found to have the IQ of an 11 year old. His testimony was contradictory and rambling but nonetheless he was convicted and sentenced to death by his all white jury.

Pirate: Albert Hicks was convicted of murdering and chopping up his fellow shipmates.  Throughout his trial Hicks showed no emotion. From the time of his arrest to his execution this case was a public circus. PT Barnum even showed up asking to make a cast of his head and bought his clothes to make a wax figure for his museum.

Discover other books or products I like: https://www.amazon.com/shop/readinggrrl
Labels: Bloodlands Harold Schecter Little Slaughterhouse Panic Rampage The Brickslayer The Pied Piper The Pirate