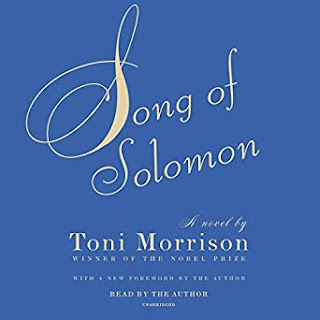 Milkman Dead was born shortly after a neighborhood eccentric hurled himself off a rooftop in a vain attempt at flight. For the rest of his life he, too, will be trying to fly. With this brilliantly imagined novel, Toni Morrison transfigures the coming-of-age story as audaciously as Saul Bellow or Gabriel García Márquez. As she follows Milkman from his rustbelt city to the place of his family’s origins, Morrison introduces an entire cast of strivers and seeresses, liars and assassins, the inhabitants of a fully realized black world.

I've tried to read this book once before and struggled with the dense prose. I decided to try the audio version of this book to see if it helped but I still struggled to focus and stay involved with the story.

Set in between 1930 and 1960's the murder of Emmett Till and the rise of Malcolm X are referenced and help to set the stage of this book.  Milkman Dead (born Macon Dead, III)  believes that names define you, that they reflect your yearnings, failures, wishes, weaknesses and even your worst fears.  It used to be a tradition in Southern families to use the Bible to choose names for newly born children, and many of the characters in Morrison’s book are named for characters in the bible but the main character Milkman was always called by his nickname that seemed to reflect where he came from.

Pilate, Milkman's aunt is a shaman, she speaks to the dead and is respected and slightly feared by everyone. She has no belly button which is scary and mysterious. Milkman is mesmerized with her. Her strange way of living and the mystery that surrounds her. In search for himself Milkman travels to southern Virginia to find his roots. To discover why he has dreams of flying, to find the peace that Pilate seems to have found.

I had a really hard time following this book, but I struggled through and while I didn't love it I'm glad I finally finished it.

Discover other books or products I like: https://www.amazon.com/shop/readinggrrl
Labels: African-American coming of age mystical