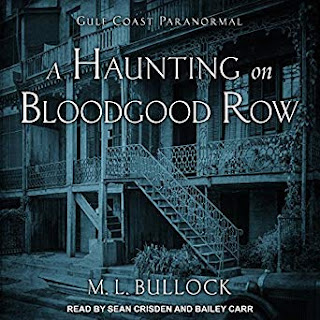 Cassidy Wright hunts ghosts with the Gulf Coast Paranormal team, but she may be in over her head when she's tasked with confronting a ghost who refuses to leave Bloodgood Row. With the power to paint scenes from the past, Cassidy dives into her art to find clues that will lead her to the truth about the life and death of Sabrina Elizabeth. But Sabrina isn't the only spirit haunting Bloodgood Row. The malevolent ghost of a jealous, cruel doctor doesn't want to set Sabrina free, and now he's interested in claiming someone on the team.

Sierra and Joshua come to a crossroads in their relationship when a secret comes out. Midas ponders a future with Cassidy, but new clues about Kylie's disappearance force him to take things slow. Together the paranormal investigators must face their latest challenge, without becoming ghosts themselves.

I didn't realize this was part of a series until I was already halfway through. Cassidy Wright is a painter who works for a paranormal investigative team.  Her sister is missing and she has gotten clues as to what happened to her through her painting. When she touches wet paint she has visions, then she paints.

Midas runs the company and is in a new relationship with Cassidy. He was effected by the death of his cousin and his interaction with his ghost which led him to start the paranormal investigation company.  They don't charge so everyone who works for them has other jobs and does this because of their passion or their gifts.

This is not a stand alone book and I wish I had read the first ones before I found this so I will be going back. Although this book is short it does draw you in and keep you interested. After I read the first two I'm going to track down the others in this series. I wouldn't say this is a well written book but it is interesting and definitely holds your attention.