Audio Book Review: What Have You Done by Matthew Farrell 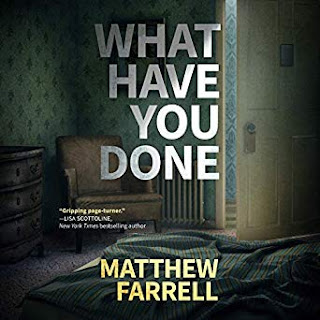 When a mutilated body is found hanging in a seedy motel in Philadelphia, forensics specialist Liam Dwyer assumes the crime scene will be business as usual. Instead, the victim turns out to be a woman he'd had an affair with before breaking it off to save his marriage. But there's a bigger problem: Liam has no memory of where he was or what he did on the night of the murder.
Panicked, Liam turns to his brother, Sean, a homicide detective. Sean has his back, but incriminating evidence keeps piling up. From fingerprints to DNA, everything points to Liam, who must race against time and his department to uncover the truth - even if that truth is his own guilt. Yet as he digs deeper, dark secrets come to light, and Liam begins to suspect the killer might actually be Sean...
When the smoke clears in this harrowing family drama, who will be left standing?

This book was written prior to I Know Everything and although it has a similar feel it isn't as good as the other.  Liam Dwyer is a forensic detective, his brother Sean is a homicide detective.  When Liam is called to a horrific crime scene that seems eerily similar to his mother who went insane and tried to drown him and his brother. What I had a hard time with is despite all the mounting evidence Liam is a FORENSIC SCIENTIST!!!! Don't you think if he was going to commit a crime he wouldn't be so careless as to leave his fingerprints or DNA for the police to find?

I figured this one out fairly quickly and wasn't surprised by the real killer.  I was a little confused by the ending not sure what Farrell was trying to imply with the interaction between Sean and Liam at the very end.

Liam was pretty whiny and weak through most of this book, turning to his brother at every opportunity which made it hard for me to like him.  He was such a victim. Sean the charismatic older brothers character was more developed and likable. Although not many of the characters in this book were very likable.  I think I felt more for the victims than I did the people still alive trying to solve the case.

Given that Farrell's second book in this series was so much better I will still try him again.

Follow my blog with Bloglovin
Labels: Matthew Farrell What have you done