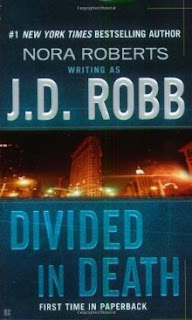 Synopsis: Reva Ewing was a former member of the Secret Service, and then a security specialist for Roarke Enterprises- until she was found standing over the dead bodies of her husband, renowned artist Blair Bissel and and her best friend.  But Lieutenant Eve Dallas believes there was more to the killings than jealous rage - all of Bissel's computer files were deliberately corrupted.  To Roarke, its the computer attack that poses the real threat. He and Reva have been under a Code Red government contract to develop a program that would shield against techno terrorists.  But this deadly new breed of hackers isn't afraid to kill to protect their secret - and its up to Eve Dallas to shut them down before the nightmare can spread to the whole country.

Review: Eve Dallas is a fabulous character, all cop yet married to the richest man in the world.  She despises being pampered, shudders at even the thought of a beautician, doesn't understand fashion and can't seem to get her husband to stop buying her expensive jewelry to wear.  Her husband Roarke is a reformed thief who seems to own just about everything.  He is completely kind hearted but don't mess with the people he cares about.  When his personal assistants daughter is framed for murder he is determined to not only prove her innocent but also to find out who is behind it.

When he uncovers evidence of a government conspiracy and information that the Homeland Security Office has information on his wifes past that could have protected her as a child things become shaky at home.  He wants revenge on the people who ignored a child in danger but Eve doesn't want that to happen.  She says it can't change the past and doesn't want him at risk for something that is over.

There is more than one story in this book, the story of the set up and murder of HSO operatives and the cover up and non action of the HSO involvement in Dallas's past.  The usual cast of characters is involved in this story and Dallas's partner, Peabody is always there to bring comic relief to a strained situation.

I love these books, they are great mind candy when you just want something fun.