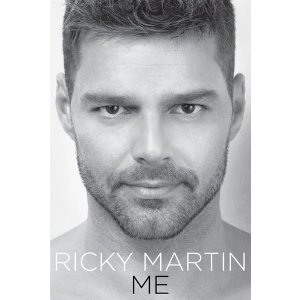 Title: Me by Ricky Martin

Synopsis: International superstar, Ricky Martin, who has sold more than 60 million albums worldwide, opens up for the first time about memories of his early childhood, experiences in the famed boy band Menudo, struggles with his identity during the Livin' la Vida Loca phenomenon, reflections on coming to terms with his sexuality, relationships that allowed him to embrace love, and life-changing decisions like devoting himself to helping children around the world and becoming a father.

Review: I could stare at the cover of this book forever. Damn what a mighty fine man Ricky Martin is.  His eyes are just piercing as if he could see straight into your soul.  Ricky Martin is not only an international musician he is also an incredibly spiritual and humanitarian person.  Reading his biography is a lesson in living. Even some of his not so great memories hold lessons for him that made him who he is and he feels grateful for the experience.

Instead of being bitter about a lost childhood spent traveling the world at breakneck pace and rarely ever having a moments peace he is thankful for the experience because of the lessons it taught him that eventually helped him to advance his career.  Instead of thinking he knew everything he spent a great deal of time looking inward to try to figure out who he was.  When fame hit again instead of being self centered and arrogant instead he looked to those who were less fortunate, a lesson he learned while in Menudo.

Ricky Martin is not just some musician tooting his own horn or writing a book to speak of his woes and horrible childhood, instead this is a book of self exploration and self discovery.  He freely admits his struggles with his sexuality and the surprise and freedom he felt after he came out and was embraced by his fans.  His children are lucky to have such a grounded and spiritual father and the world gifted with his music and now his story.

If you want to be inspired and see how an international star can be humble and grateful for everything he has then read this book.  I was so drawn in I finished it in a day.
Labels: Autobiography Menudo Ricky Martin