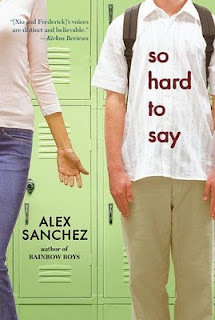 Title: So Hard To Say by Alex Sanchez

Publisher: Simon & Shuster
230 pages
Genre: YA
Synopsis: Thirteen-year-old Latina chocoholic-chatterbox Xio can't keep her eyes off blond-haired, steel-eyed Frederick, the intriguing transfer student just in from Wisconsin. At first, the soft-spoken newcomer, unsure of his new Southern California junior high and maybe his own sexuality, doesn't know what to make of her pursuits. Slowly and surely, Xio charms her way into his life and soon absorbs him into her group of fabulous girlfriends whom she dubs the "Sexies." Content with this new niche, and his position on a pick-up soccer team, Frederick gradually becomes aware of Xio's real agenda: to make him her first boyfriend. All the while he finds he can't keep his eyes off Victor, his soccer buddy. Frederick's sexual confusion escalates, as do his dodging techniques when it comes to Xio's advances. However, when she gets him in a closet with her and at last gives him a smooch, things boil up to crises.

Review:  Alex Sanchez has an uncanny way of getting into the head of a teenager.  The voices of both Xio and Frederick ring very true.  But this isn't just the story of a boy struggling with his sexual identity.  Its also about struggling to fitting in, dealing with estranged parents and glimpses into the Latino culture.  Frederick, a white, blonde, blue eyed boy moves from the midwest to California and finds himself in a very different culture. A lot of the kids at his school are Latino and speak in a mix of Spanish and English, and the boys are a lot more physical with each other than the kids from his old school, throwing their arms around each others shoulders, pushing each other in jest...it was like a whole new world.   Xio sets her sights on Frederick from day one and attempts to woo him by using her popular group of friends but things just don't seem to be going as planned and she starts to wonder if its her or if Fredrick is hiding a secret.  There are so many subtle layers to this book but the main theme is the struggle to fit in.
Labels: coming out Latin culture lgbt youth spanglish