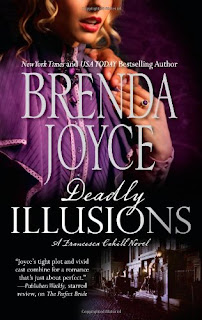 This book is due to be released 12/28/10.  I received an advanced electronic galley of this book through netgalley.com

Synopsis: Irrepressible heiress and intrepid sleuth Francesca Cahill moves from her own glittering world of Fifth Avenue to the teeming underbelly of society, a place of pride, passions…and sometimes deadly perversions.

Despite the misgivings of her fiancé, Calder Hart, Francesca cannot turn away from a threat that is terrorizing the tenement neighborhood of Lower Manhattan. A madman has attacked three women, but while the first two victims survived, the third is found dead. All the victims are impoverished but beautiful Irishwomen—and Francesca fears that her dear friends Maggie Kennedy and Gwen O’Neil could be next.

Soon she is working with her former love, police commissioner Rick Bragg—Calder’s half brother and worst rival. But even as Calder’s jealous passions leave his relationship with Francesca teetering on the brink, Francesca is frantically on the killer’s trail, certain the Slasher will strike again, afraid she will be too late…

Review: The relationships in this book are complex and the insecurities familiar.  Brenda Joyce has capture the complexities of love, jealousy, passion and envy.  Many romance novels include these themes but Joyce's characters seem to come alive and the mysteries could have been taken from the news today.  I liked that this wasn't your typical sappy sweet romance, that there is more than one major player in the plot and all the characters seem to work well together.  Joyce does not give a rose colored look at relationships in fact all the relationships in the book have their own struggles and complexities.  They are all somewhat flawed and thats what makes them all the more believable.

My only disappointment with this book is that although it says its the first in the series, Francesca has already solved several other cases and there are underlying relationships that play and integral part in the relationships of the present.  I felt like I had found the series somewhere in the middle instead of at the beginning.  That being said Joyce does a good job of explaining things and even though I wish I had been there with Francesca solving her first mystery or even when she decided to become a sleuth I was happy to finally meet her.  I look forward to the next books in this series.
Labels: Francesca Cahill historical fiction mystery new york