What do Statues have to say? 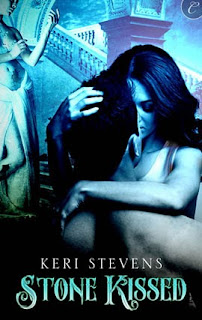 This book is due to be released on December 27, 2010 through Carina Press the ebook store.  I received  an advanced electronic copy through netgalley.com

Synopsis: When Delia Forrest talks to statues, they talk back. She is, after all, the last of the Steward witches.

After an arsonist torches her ancestral home with her estranged father still inside, Delia is forced to sell the estate to pay his medical bills. Her childhood crush, Grant Wolverton, makes a handsome offer for Steward House, vowing to return it to its former glory. Delia agrees, as long as he'll allow her to oversee the restoration.

Working so closely with Grant, Delia finds it difficult to hide her unique talent-especially when their growing passion fuels her abilities.

But someone else lusts after both her man and the raw power contained in the Steward land. Soon Delia finds herself fighting not just for Grant's love, but for both their lives...

Review: Delia's relationship with the statues that she works with and grew up around is hilarious.  They are often either extremely feisty, parental, or childish which make for interesting relations.  Grant is Delia's fantasy.  She has been in love with him since she was a child but doesn't believe that he could care about her other than as a fling.  As Delia and Grants passion grows so to does Delia's power and she find that the statues that have been her friends forever are now beginning to move.  So now not only does Delia need to hide her ability to talk to the statues but also run all over town retrieving them and putting them back where they belong.

Keeping her secret is proving too difficult with Grant so she finds herself telling him about the different statues even though she knows he doesn't believe her. In fact Grant believes she is mentally unstable and delusional but that her little quirk of talking to statues is just that and not something to be too alarmed about.  However, circumstances turn when Grant finds himself noticing strange things happening with the statues around them.  Maybe Delia isn't so crazy afterall, or maybe its catching!

While the passion grows between Grant and Delia, another woman in town is setting her sights on Grant and Delia's land.  She believes it is her birth right since she is also a descendant of the Steward family.  But Cecily is dangerous and men around town are disappearing at an alarming rate.

This book was faced paced and fun. The characters came to life and I really felt vested in them.  I've read my share of romance novels and you can't always say the situations seem natural but for a paranormal romance these did.  The romance didn't seem forced.  I loved the statues and the situations they put Delia in.  A great fun read!