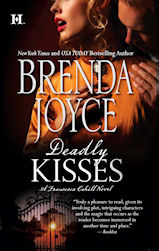 This title is due to be released in February 2011.  I received an advanced electronic copy through netgalley.com

Synopsis: New York 1902 - Called to the home of her fiancé’s former mistress late one night, Francesca finds her curiosity piqued. But upon arrival, she is shocked to find Daisy Jones’s bloodied body…and even more devastated when the evidence points to one suspect—her fiancé, Calder.

Francesca cannot—will not—believe that Calder is capable of such an act. Still, she is unable to shake her instinctive sense that Calder is lying about something. The police are far less inclined to believe his innocence, and Calder is arrested for Daisy’s murder. But Francesca’s heart is not easily swayed…until a life-altering secret is exposed that could destroy their future together.
Review: I finished this on New Years Eve but wasn't capable of writing the review until today.  So that being said, after some investigation...this book is being publicized as the 2nd in the Deadly series but it is really the 8th.  The publisher is reissuing the last 3 books in this series to generate interest in the newest Deadly book due out in March.  I'm not a fan of this tactic and I'm kinda pissed I was fooled into believing I was reading these books in order ....that being said I am in love with Francesca, Calder and many of the other characters in this series.
These books remind me of the "In Death" series written by JD Robb (aka Nora Roberts) in that the characters are recurring and the only thing really resolved at the end of the book is the mystery but the complicated relationships between the characters aren't as neatly wrapped up.

Calder's ex-mistress if found dead and the list of suspects is small and he seems to be the most likely candidate.  To avoid even more scandal Calder breaks his engagement with Francesca but she is unwilling to let him go.  In a time when reputation was everything it was a bit of a stretch to believe that Francesca would risk everything just to be with the man she loves but since its a romance novel we will let that one slip by.

There are always twists and turns to these books and just when you think you know who did it, there is a new suspect.  I have to give Brenda Joyce credit she weaves a good story and I am intrigued to read the next one and I hope her publisher allows her to write more for this series.