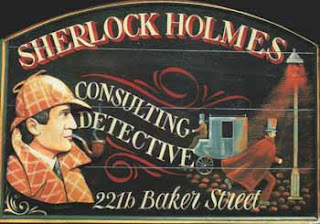 Apparently the Conan Doyle Estate has hired Anthony Horowitz of the Alex Rider Series to write a new Sherlock Holmes novel.  I'm a little torn on how I feel about this.  On the one hand it will be interesting if he can keep to the spirit of the series and it would be nice to revive Holmes again.  On the other hand why can't we just be satisfied with what was written?  There are so many authors these days who have passed away and yet they still have books being published by ghost writers or their names are now being used as a title...sort of like Robert Ludlum

whose latest Bourne books were written by another author (and honestly aren't that good).

I completely understand wishing that our favorite authors hadn't gone to the big writers workshop in the sky and I will miss their writing but to give the series to someone else just doesn't seem right to me somehow.  No offense to Anthony Horowitz

I'm sure his Holmes novel will be interesting but it can't be the same.  Unless he somehow finds a way to make it his own I think it will always fall short. Even Laurie R King

has a series with Holmes as a main character but she has made the story her own and its fabulous...if you haven't read any of them you are truly missing out.

Even movies do this stupidness and I'm not talking about when they make books into movies because 9 times out of 10 they screw it up somehow...so I always try to think of movies as stand alone stories.  I do have to give credit to the new Star Trek movie which I was anxious about watching but wound up loving because they changed the whole time line so the characters can't be the same as they were because their relationships formed differently.  Brilliant move on the part of the writer if you ask me.  It satisfied old fans and new ones.

Here is to hoping that Anthony can find his own Holmes voice.
Labels: sherlock holmes