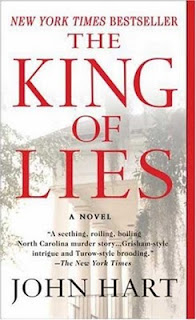 Title: The King of Lies by John Hart

Synopsis: Jackson Workman Pickens-known to most as "Work" - mindlessly holds together his disintegrating life; a failing law practice left to him when his father, Ezra, mysteriously disappeared, a distant wife who shares their loveless marriage, and an estranged sister who bore the brunt of their childhood trauma.

And then Ezra's body is discovered.

Set to inherit his father's fortune, Work becomes a prime suspect. But so does his sister, Jean.  As much as Work's life was overshadowed by his domineering father, Jean's life was nearly destroyed by him. But does that make her capable of vicious murder? Fearing the worst, Work launches his own investigation, crossing paths with a power hungry detective, a string of damning evidence and the ugly rumors that swirl within his small moneyed Southern town.

Review: King of Lies is Hart's 1st book.  Its always fun to read a writers first book after reading more recent ones and I have to say John Hart was good from the beginning.

Work has lived in much more than the shadow of his father.  He has lived his life.  When his father's body is found the realization that everything in his life was orchestrated by his controlling father sends Work into a downward spiral, all while trying to protect his emotionally disturbed sister, who he believes killed their father.  His actions of course lead the police to zone in on him, not to mention the $15 million he is set to inherit.  And while Work watches his world unravel the people he thought were friends seem to turn away from him and unlikely strangers become his biggest supporters.

This is not just a murder mystery but also a look into family dynamics. How our actions effect our children and how to break free and live your own life.  A quick, moody, read that is sure to keep you turning pages.