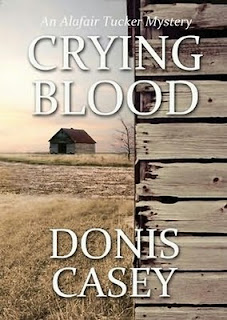 I received this book as an advanced galley from the publisher via netgalley.  This title will be released in February 2011.

Synopsis: In the autumn of 1915 Shaw Tucker’s dog, retrieves an old boot with the bones of a foot inside. Buttercup then leads the hunters to a shallow grave and a skeleton with a bullet hole in the skull. That night, Shaw awakens to see a pair of moccasin-clad legs strolling by his tent flap. After he returns home, Shaw can’t shake the memory of the disembodied legs and the ghostly voice. Someone is following him. A boy, Crying Blood, followed Shaw hoping to find a white haired man who killed his brother.

What a great glimpse of life in the 1900's.  Alafair and Shaw have 10 children ranging in age from 25 to 3 years of age and while not all of the children live at home anymore they all live close by, including Shaws parents.  I would say that this book is more a look into life during the 1900's than a mystery although one does exist in the book.  Maybe I was just too taken in by the descriptions of the cooking, the hog slaughtering, hunting etc that the family had to do.  I was tired just thinking about what they did in one day!  You can tell that Donis Casey did her research.  In the back of the book there was more detailed descriptions on hog slaughtering and butchering, including recipes on making blood pudding, and head cheese.  There was also a section on how to make quail pie!

This book was also ripe with Native American legend and history.  Crying blood was a Creek, seeking to rebalance the world by avenging his brother who was killed.  Thinking that Shaw might be a key to finding the person or spirit that killed his brother Crying Blood follows him home from a hunting trip.  Crying Blood isn't really his name, though it is a name that the Creek take when they are on a mission to avenge someone.  Little bits and pieces of Indian history and ritual like the taking of a special name, are scattered throughout the book.

I've never been one to be captured by American History but reading the descriptions in this book I found my interest peaked on life back then.  I was completely taken in by this family and might have to seek out the other books in this series.