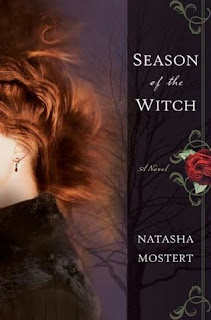 Title:Season of the Witch by Natasha Mostert

Synopsis: When Gabriel Blackstone, a computer hacker and information thief, is asked to investigate the disappearance of a friend's stepson, he encounters two extraordinary sisters. Minnaloushe and Morrighan Monk are obsessed with alchemy and the ancient art of Memory, and soon Gabriel is caught up in their complex world, risking his own life.

Review: I have been meaning to read this book for a while but after seeing all types of promos for a movie of the same name I thought I should dig it out.  The good news is that I loved the book, the not so good news depending on your point of view is that the movie by the same name is not based on this book!  Oh well it inspired me to read this books so I'll give it credit anyway.

Six months from graduating from Oxford Gabriel left without a reason and decided to become a professional thief.  So far its been a very lucrative decision. He and his partner are in the information business, they can hack almost any system, if the price is right. Life is good and Gabriel is content until a ghost from his past shows up and leads him into a world of lust, greed, and magic.


Gabriel is contacted by a wealthy business man on what he thinks is a routine job but he finds that his ex-girlfriend is now married to said wealthy business man and wants him to use his special talents as a remote viewer to find her stepson. The problem is that Gabriel stopped using his gift and has tried to forget about it. But he can't seem to say no to Cecily.

The search leads to a pair of sisters who enchant him. Obsessed with the power of memory and alchemy, they lure him into a magical world. A journal, suspicious deaths, a mysterious room and a growing fascination with the sisters' world leads Gabriel to places he would rather forget and with the hope that he can get out of this alive.

This book sucked me in from the first chapter.  The characters are fascinating and I found myself not wanting to put it down. Its a little bit like Inception mixed with Witches of Eastwick.