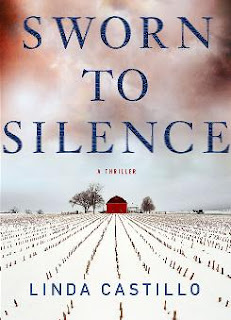 Synopsis: Sixteen years ago, a series of brutal murders shattered a peaceful farming community.  A young Amish girl named Kate Burkholder survived the terror of the Slaughterhouse killer....but fled to the safety of the big city.

Years later, Kate returns to Painters Mill, Ohio as Chief of Police. She's come to terms with her past - until the first body is discovered in a snowy field.

Kate vows to stop the killer before he strikes again. But will she betray both her family and her Amish past - and expose the dark secret that could destroy her?

Review:  Kate Burkholder is the Chief of Police of Painters Mill, but she also grew up there on one of the Amish farms.  After surviving a brutal rape at 14 Kate turns her back on her church and decides to go live with the "English" (non-Amish).  After becoming a cop in Columbus Kate finds herself back in Painters Mill investigating a brutal murder that is a dead ringer for killings that were attributed to the Slaugherhouse killer 16 years ago.  But it can't be the same person because Kate believes she killed him 16 years ago when he raped her and her family covered up the crime.

Now unable to share her secret or why she thinks she is looking for a copycat Kate finds herself torn between protecting her family, and her career and catching a killer.  As the killings escalate and other agencies get called in Kate finds herself desperate to solve the case.

Despite the Bann that the Amish placed on Kate she is still their best ally.  A great go between the English police and the Amish culture.  She speaks their language and understands their culture.  While the Amish/English angle doesn't play too much in this case I hope to see her explore it more in further books.

Castillo is a great addition to the mystery/thriller authors out there.  In league with James Patterson and Jeffrey Deaver Castillo keeps you guessing right up until the end.  So descriptive I found myself cuddling up inside a quilt trying to stay warm as I read about the characters traipsing through the snow in subzero temperatures tracking a killer.  What a great start to a new series.  I can't wait to read the follow up Pray for Silence