I wish I remembered nothing 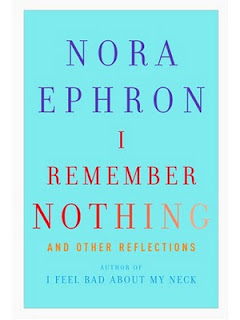 Title: I remember Nothing and other reflections by Nora Ephron

Synopsis: These essays cover the gamut of later-life observations (she is 69), from the dourly hilarious title essay about losing her memory, which asserts that her ubiquitous senior moment has now become the requisite Google moment, to several flimsy lists, such as "Twenty-five Things People Have a Shocking Capacity to Be Surprised by Over and Over Again," e.g., "Movies have no political effect whatsoever." Shorts such as the several "I Just Want to Say" pieces feature Ephron's trademark prickly contrariness and are stylistically digestible for the tabloids. Other essays delve into memories of fascinating people she knew, such as the Lillian Hellman of Pentimento, whom she adored until the older woman's egomania rubbed her the wrong way.

Review: This book was the January pick for my book club.  I guess after the holidays everyone wanted a light read.  The funniest thing about this book is that no matter how hard I tried I just could not remember the name of it!  Pretty funny consider the name of it.  This is not my typical pick of books but since my reading tastes are all over the place I was open to it.

Each chapter is its own essay.  The ones about her life that didn't relate to her dwindling memory were really very good, but the others just seemed like a self indulgent pity party.  Who cares if you can't remember the name of a movie from 10 years ago, or the fact that you don't remember how the Beatles were on Ed Sullivan when you were in the back of the auditorium not able to hear.  There are reasons why we don't remember some of these things, they just don't matter.  Obviously getting lost going to see Eleanor Roosevelt was more memorable than the actually meeting - maybe because it had been played up in her head for so long that the actual meeting didn't live up to expectations...who knows but really do we need to dwell on it?

The book was supposed to be tongue in cheek humor but I found it all over the place.  Its a quick read, only took me a few hours but now I wish I had forgotten the name of the book and had those hours back to read something else.