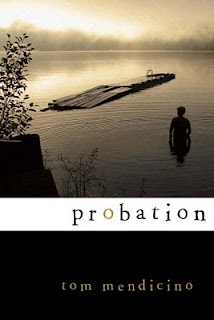 Synopsis: A middle-aged married man whose indiscretion in a men's bathroom forces him to re-evaluate his chosen life becomes a surprisingly sympathetic narrator in this potent debut. When Andy Nocera is arrested at a public highway rest stop, his wife leaves him, prompted by her father, for whom Andy works. Resigned to putting his life back together, he moves home with his mother, recently diagnosed with cancer, and takes a job as a traveling salesman around which he schedules his court-ordered therapy with a stubborn Jesuit priest. Andy attempts to detangle his motivations for both getting married when his emotions lay elsewhere and settling for an existence as a dutiful son.

Review: Andy's life is spiraling out of control.  First he is arrested for an indiscretion in a bathroom, sentenced to probation he then loses his wife and his job.  Plodding along through his life with a sales job he hates, living with his mother who is dying and attending therapy sessions with a priest that constantly irritates him.  Andy is having a hard time reconciling his desires with the expectations of the people around him.  He hates his frequent hook-ups but can't bring himself to admit he's gay.

Mendicino's coming out story of a married man rings true in so many aspects.  From the self loathing and fight Andy puts up admitting his sexuality to himself,  to the despair of watching his mother dying of cancer.   This book is downright depressing in so many ways and it is difficult to wade through it but there is redemption in the end and well worth the read.