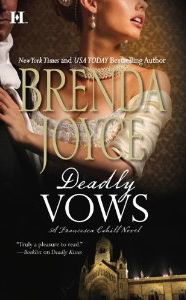 I received this as an advanced readers copy from netgalley.com This title will be released in February 22, 2011

Something happened on the way to her wedding…
On the morning of her wedding to Calder Hart, amateur sleuth Francesca Cahill is lured away to a private viewing of a portrait that could destroy her entire family: the nude Hart commissioned of her. Her desperate quest to recover the scandalous portrait leads her into a dangerous trap with no way to escape—until it’s too late. And when Francesca finally arrives at the church, it’s vacant. She has unintentionally jilted Hart at the altar.
When Hart tells her their estrangement is for the best, Francesca is devastated. With a blackmailer intent on destroying her reputation, Francesca turns to Rick Bragg, the city’s powerful police commissioner. Together they scour the sordid streets of lower Manhattan, following a deliberately laid trail of clues in a race against the clock. And once it becomes clear that Bragg’s marriage is failing, Francesca must war with her feelings for him, battle Hart’s jealousy and escape a killer—all as she fights to win Hart back. But sometimes, passion just cannot be denied…
Review:  What can I say that I haven't already said about this series?  I'm in love with Francesca! Her independence, her ability to find herself in the most precarious situations and her ability to get out of them. The men in her life are all bold and gorgeous, especially her fiancée Calder Hart who is a hurt little boy trapped in a delicious manly package.

This book has it all, romance, mystery, kidnapping, conspiracies, love triangles, wealth and forbidden love.  Its a bit like a historical Janet Evanovitch.  I can't get enough! The publisher is launching Deadly Vows with the previous 2 titles in an attempt to grow the series and attract new readers. If you would like to see the Deadly series continue, you can help! Give a friend an old, used book and get her hooked. Pitch the series to everyone, chat about it online in chat rooms and on reader websites. And of course, run out to buy those books!