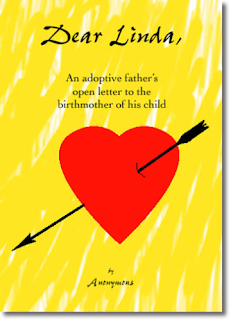 Title: Dear Linda, An Adoptive Father's open letter to the birthmother of his child by Anonymous

Synopsis: Often during the past decade this adoptive fathers thoughts returned to the memory of a meeting with a young pregnant girl, a young girl whose ultimate, loving decision changed the course of his life. "Dear Linda," is an open letter to the birthmother of his child. But it is also more,it is an open letter to all birthmothers from the perspective of an adoptive father.

Review: Perhaps I got the wrong impression of this book by its synopsis but it was not what I expected.  What I expected was an adoptive father explaining his feelings toward the birth parents of his child.  What I got instead was a detailed history of their infertility, and the life of his daughter up to age 10.  This book is only 88 pages and it wasn't until the 84th page I felt that this book lived up to its title.  In his last chapter entitled End of the Beginning, the author finally comes back to the adoption, talks about talking to his daughter about her birthmother and how he feels when he does.  He also ends with another heartfelt thank you which is how the book began.

Overall I was not impressed and don't understand how this book can be billed as an open letter to all birth mothers from the perspective of an adoptive father.  It is quite simple a chronicle of  his daughters life. While there were a few redeeming passages the overall book was underwhelming and not really a letter to the birth mother at all, unless you consider it to be 10 years worth of updates on the health and well being of their child.  I would save your money and pass on this title.