(19) Discovery of a new Author 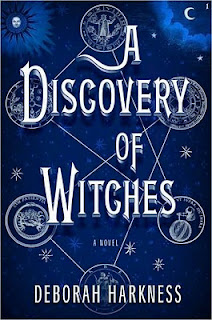 Synopsis: Deep in the stacks of Oxford's Bodleian Library, young scholar Diana Bishop unwittingly calls up a bewitched alchemical manuscript in the course of her research. Descended from an old and distinguished line of witches, Diana wants nothing to do with sorcery; so after a furtive glance and a few notes, she banishes the book to the stacks. But her discovery sets a fantastical underworld stirring, and a horde of daemons, witches, and vampires soon descends upon the library. Diana has stumbled upon a coveted treasure lost for centuries-and she is the only creature who can break its spell.


Diana is a bold heroine who meets her equal in vampire geneticist Matthew Clairmont, and gradually warms up to him as their alliance deepens into an intimacy that violates age-old taboos.
Review:  Diana is the daughter of two of the most famous witch families, the Bishops and the Proctors.  Her parents are killed when she is seven and since then she has decided to live her life as magic free as she can.  She shuns her Aunts attempt to teach her any magic and goes into a profession where research is her companion not magic.  A historian with a focus on alchemy Diana stumbles upon a book that, unbeknown to her, has been lost for centuries. The discovery of the book creates a ripple throughout the supernatural world and everyone is determined to get their hands on it at any cost.

I was hooked on this book from page one, the history, the quotes, the magic all drew me in and wouldn't let me go.  Like a Twilight for adults with better writing, Harkness sucks you into Diana's world leading you along on her magical journey and her education of the supernatural world.

This book is full of conspiracy, intrigue, politics and romance.  There is so much packed into this book that when I was only a third of the way done I couldn't figure out where it was going because so much had already happened! I love to be surprised by books and new authors and Harness definitely fits the bill.
Labels: Discovery of Witches