(21) Cornwell trying to regain her edge 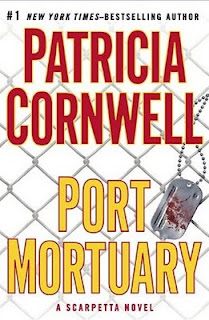 Synopsis: The story begins at the real Port Mortuary at Dover Air Force Base, where Scarpetta is assisting in developing techniques for virtual autopsies, then shifts back to her recently adopted home at Boston's Cambridge Forensic Center (CFC). A young man's mysterious death becomes even stranger after full-body scans reveal destruction so extensive it's as if a bomb went off inside his body. Scarpetta and husband Benton Wesley-along with her niece, Lucy Farinelli, and ex-cop turned CFC investigator Pete Marino-discover links not only to a government project with the ability to cause mass casualties but also to another grisly case currently under investigation.

Review:  I've been a long time Scarpetta fan but the last few books have been seriously lacking.  I was hesitant to buy this one but figured I'd give her another whirl.

Good things about this book? A return of the first person narrative. This is a huge improvement over the last several books.  I like being inside Kay's head.  Seeing things through her eyes.Although slow to start (very slow took me until half way through the book to actually want to continue reading) the story does pick up and get intriguing.

Scarpetta returns to the CFC after a stint at the Dover Port Mortuary to find her lab in a shambles.  Her assistant is MIA and has been leaking information on cases and using her office as his own, her co-workers aren't showing up for work and doing shabby work when they are there, her husband Benton is being allusive and closed lipped when it comes to what is happening at the lab and about the cases she recently stumbled into.  For the first half of the book it seems Kay just whines and complains about the state of the lab, the state of her marriage and her relationship with her niece Lucy and co-worker Marino. It isn't until she loses some of her self pity that she starts using her brain and becoming the investigator we all fell in love with at the beginning.

The case itself is intriguing, the means of death scary and high tech and the political intrigue plausible if only it had all been put together a bit more cohesively. I don't know whats happened to this series, if Cornwell just gave up on Scarpetta or just somehow lost her edge.  I was hoping this book would redeem her past few but while it has its good points its still lacking overall.  There are glimpses of books past but it hasn't quite gotten back up to its potential again. I'm not sure if I'm willing to give my time to any more of these books but I guess only time will tell.
Labels: Patricia Cornwell Scarpetta