(25) Aliens plot to take over Earth with mind control 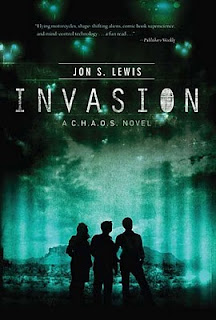 I received this book as an advanced readers copy from netgalley.com, it was released in January.

Synopsis: Colt McAlister was having the summer of his life. He spent his days surfing and his nights playing guitar on the beach with friends. He even met a girl and got his first car. But everything changes when his parents are killed in a freak accident.

He's forced to leave his old life behind and move to with his grandfather. The only person he knows at the new high school is a childhood friend named Dani. And Oz, a guy he's sure he's never met but who is strangely familiar.
But what if his parents' death wasn't an accident? His mother, and investigative reporter, was going to expose a secret mind-control program run by one of the world's largest companies. Before she could release the story, what if agents from Trident Biotech made sure she couldn't go public?
Vowing to uncover truth, Colt gets drawn into a secret world of aliens, shape shifters, flying motorcycles, and invisible getaways.
Review: A fun boy saves the world book.  Colt's parents are killed in a car accident but is it really an accident?  At the funeral he overhears his brother talking to a Senator about how it may have been murder due to a story that his mother, a reporter, was working on.

Forced to go live with his grandfather Colt finds himself transplanted in Arizona where he only knows one person, a girl his age named Dani.  But he can't shake the conversation he overheard about his parents and wants to figure out what really happened. When strange things start happening all around him he realizes he may find the key to what happened to his parents right there in Arizona.  A cell phone he's never seen before shows up in his back pack, a guy he meets at school seems really familiar even though they supposedly have never met, and strange text messages send him on missions to uncover a mind control project being run by the multi-billion dollar corporation biotech.  All of this strange information leads Colt to discover the presence of aliens living in our world and his families role in protecting earth from an invasion.

The opening of the book was a little off to me but it quickly started to make sense and then it flowed quickly from beginning to end.  Although there was a completion to the specific story line in the book it was also left wide open for the sequel.  If you ever dreamed of being a secret agent and flying around with a jet pack then this is the action packed book for you.