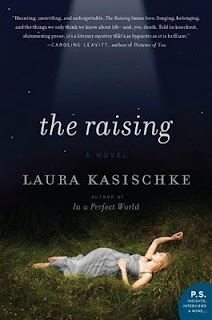 Title: The Raising by Laura Kasischke

I received this book as an advanced electronic copy from the publisher via netgalley.com it is due to be released at the end of March.


Synopsis: The accident was tragic, yes. Bloody and horrific and claiming the life of a beautiful young sorority girl. NICOLE was a straight A student from a small town. Sweet-tempered, all-American, a fomer Girl Scout, and a virgin. But it was an accident. And that was last year. It’s fall again, a new semester, a fresh start.

CRAIG, who has not been charged with murder, is focusing on his classes, and also on avoiding Nicole’s sorority sisters, who seem to blame him for her death even though the police did not.

PERRY, Craig’s roommate, is working through his own grief (he grew up with Nicole, after all, and had known her since kindergarten) by auditing Professor Polson’s sociology class: Death, Dying, and the Undead.

MIRA has been so busy with her babies—two of them, twins, the most perfect boys you could imagine, but still a nearly impossible amount of work even with Clark’s help—that she can barely keep herself together to teach (Death, Dying and the Undead), let alone write the book she'll need to publish for tenure.And SHELLY, who was the first person at the scene of the accident, has given up calling the newspapers to tell them that, despite the "lake of blood" in which they keep reporting the victim was found, the girl Shelly saw that night was not bloody, and not dead.

Review: What a dark twisted tale.  Not really a ghost story but more of a conspiracy tale.  The story is told in the point of view of 4 main characters and often switches between past and present. This did get a bit confusing at times and I sometimes I found myself lost not realizing we had slipped back to the past when I thought we were in the present and visa versa so the flow was a little off for me.

All the characters and events center around a car accident that supposedly killed a co-ed named Nicole.  The news stories are wrong and everyone who is connected to the accident seems to be haunted by someone they think is Nicole.  Who is covering up the real facts of what happened, what happened to the other 2 girls who went missing from the campus a few years ago and did no one really make the connection they all belonged to the same sorority?  The answers to these questions kept me reading but also hoping that the author would get to the point already.  I like suspense but this dragged on a bit.  I'm also not too sure how much I appreciated the one lesbian professor in the book is caught in a compromising situation with a student.  It just didn't feel right and almost seemed thrown in because she was unsure what to do with the character.

Overall I enjoyed the book despite issues I had with it.  It did keep me reading and the story definitely had its creep factor moments.
Labels: death dying ghosts haunting sorority