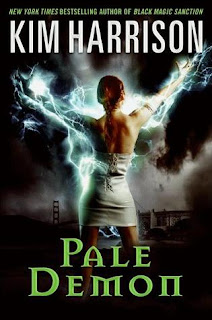 Synopsis: The ninth Rachel Morgan novel finds our tough and feisty witch on a mission to get her shunning rescinded, which requires traveling to the annual witch convention in San Francisco. But the coven doesn’t want her to make her appointment, so they’ve put her on the no fly list, which is why she has to accept Trent’s offer of a cross-country car trip. The rich elf has his own reasons for traveling cross-country, telling Rachel and Ivy that he is on a traditional elf quest.

Review: Whenever you put Rachel, Jenks, Ivy and Trent together there is bound to be trouble and plenty of action, not to mention plenty of humor.  Driving across country with a cranky Elf on a mission, and a member of the coven who is hellbent on banishing Rachel to the Ever-After is not so easy.  Especially when trouble seems to follow you where ever you go.

Full of action and new revelations Pale Demon delivers another great tale in Rachel Morgan's life.  I think this book really deepens each character, revealing things that you didn't know before, which is hard to do when its the 9th book in the series! By the end of the book I would say I have a deeper respect and understanding of many of the main characters and the twist at the end leaves Rachels future able to go in so many different directions.

Its not easy to continue to entertain in such a long series but Kim Harrison has done it again.  I have always loved the characters and Rachel's ability to get herself into trouble rivals Stephanie Plum from Janet Evanovitch's number series.  You also always seem to learn something new about one of the characters. Some deep hidden trait, or mystery which I think is brilliant.