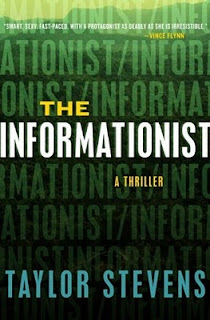 Title: The Informationist by Taylor Stevens

Synopsis: Vanessa "Michael" Munroe deals in information - expensive information- for corporations, heads of state, private clients, and anyone else who can pay for her unique band of expertise. Born to missionary parents in lawless central Africa, Munroe took up with an infamous gun runner and his mercenary crew when she was just fourteen. As his protegee she earned the respect of the jungles most dangerous men, cultivating her own reputation over the years until something sent her running. During almost a decade building a new life and lucrative career from her home base in Dallas, she's never looked back.

A Texas oil billionaire has hired her to find his daughter, who vanished in Africa four years earlier. Its not her usual line of work, but Munroe can't resist the challenge. Pulled deep into the mystery of the missing girl, Munroe finds herself back in the land of her childhood, betrayed, cut off from civilization, and left for dead. If she has any hope of escaping the jungle and the demons that drive her, she must come face-to-face with the past that she's tried for so long to forget.

Review: So many of the reviews of this book compare Munroe with Lisbeth Salander from the Millenium Trilogy.  While I can see some of the similarities I find Munroe much more approachable than Lisbeth.  Lisbeth is socially awkward with little affect.She kicks butt but she has the social skills of a gnat.  Munroe is also a survivor, and knows how to handle herself  but she can be charming and funny.  She uses her wit, her excellent language skills and her power of observation to solve peoples problems by providing information that they couldn't get on their own.

I enjoyed following her story, learning how she came to be who she was and I appreciated that I didn't have to wait until the 2nd book to really learn more about her character.  While some of the action might have been over the top I'm not sure it was any more incredible than what I've read in other books and accepted as plausible.  I thought this was a great start to a new series and I'm really looking forward to the next book.