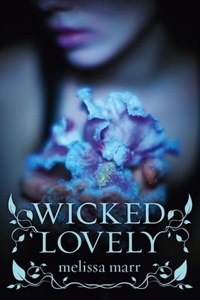 Synopsis:
Rule #3: Don't stare at invisible faeries.
Aislinn has always seen faeries. Powerful and dangerous, they walk hidden in mortal world. Aislinn fears their cruelty—especially if they learn of her Sight—and wishes she were as blind to their presence as other teens.

Rule #2: Don't speak to invisible faeries.
Now faeries are stalking her. One of them, Keenan, who is equal parts terrifying and alluring, is trying to talk to her, asking questions Aislinn is afraid to answer.

Rule #1: Don't ever attract their attention.
But it's too late. Keenan is the Summer King who has sought his queen for nine centuries. Without her, summer itself will perish. He is determined that Aislinn will become the Summer Queen at any cost—regardless of her plans or desires.

Suddenly none of the rules that have kept Aislinn safe are working anymore, and everything is on the line: her freedom; her best friend, Seth; her life; everything.

Review: What a dark strange tale.  Ash is a modern girl who has the sight to see the faerie world which is a frightening place. Keenan has been searching for his Summer Queen for centuries.  Each girl that he pursues thinking she might be the one will either become the Queen or be bound as a Summer Girl losing her mortality and forever tied to Keenan or if she accepts the challenge and fails she may become consumed with Winters Chill and become the Winter Girl.  Its a dark twisted tale of treachery, power struggles and free will.

Ash may be the Summer Queen but she will only consent to taking the test on her terms.  Keenan isn't used to taking no for an answer and is baffled by the modern girl.  I really like the characters even when I didn't "like" the characters.  The story itself had so many layers that there is much that left me wanting to learn more but I guess thats what the other books in the series are for.