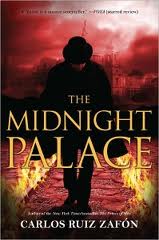 I received this book as an advanced electronic book from netgalley.com.  This title is set to be released May 3, 2011

Synopsis: Set in Calcutta in the 1930s, The Midnight Palace begins on a dark night when an English lieutenant fights to save newborn twins Ben and Sheere from an unthinkable threat. Despite monsoon-force rains and terrible danger lurking around every street corner, the young lieutenant manages to get them to safety, but not without losing his own life. . . .

Years later, on the eve of Ben and Sheere's sixteenth birthday, the mysterious threat reenters their lives. This time, it may be impossible to escape. With the help of their brave friends, the twins will have to take a stand against the terror that watches them in the shadows of the night--and face the most frightening creature in the history of the City of Palaces.

Review: Carlos Ruiz Zafon is one of my favorite authors and his young adult books are just as entertaining. Written when he was in his twenties, along with The Prince of Mists.  The Midnight Palace starts off quickly and never really slows down.  Zafon creates stories that are filled with atmosphere that you can almost taste. You can sense the characters emotions and feel like they could be someone you know. I was drawn in from page one.

Who is the man who shoots fire from his fingers and is determined to kill Ben and Sheere?  Why is he hunting them and can Ben and his friends defeat this mystery man and save Ben and Sheere?  A ragtag bunch of orphans who bound themselves together in a secret society swear to protect their friends Ben and Sheere at all costs.  Each has their own talent and strength and it will take all of them if they are to make it out alive.

This story shows that family doesn't just mean those related to you and that each person has a talent and a strength all their own.  Just because you aren't good at drawing doesn't mean you aren't good at something else.  Everyone is necessary and anger and bitterness will consume you like fire. Brilliant story telling.