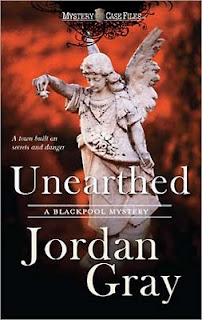 I am a little backlogged at the moment but I received an advanced electronic copy of this book via netgalley.com.  The book was release April 27, 2011.

Synopsis: The fourth and final installment in the Mystery Case Files program! Secrets are at the heart of Blackpool....

Behind the colorful charm and vibrant history of the English seaside town of Blackpool is a legacy of secrets. Secrets people have killed to keep hidden. But for Michael and Molly Graham, finding the truth has become personal. Their friend clings to life in a hospital—shot to keep him quiet—and the couple is driven to uncover what he would risk his life for…and what someone would murder for.

But the pieces of this puzzle are as disparate as any they’ve faced—a sunken pirate ship, a one-legged skeleton, vengeful curses and a grim family legacy. And if they put the pieces together, will they only be digging their own graves?

Review: Michael Graham, a British videogame designer (his video game designing really does play into the plot of this story), and his American wife Molly, have relocated to the small English coastal town of Blackpool. Molly has successfully obtained grants for redevelopment of the enchanting little town of Blackpool, and is overseeing the project.  While they've been in Blackpool the Grahams have found themselves involved in various mysteries and investigations that have led them to help the local police.  The chief of police, Inspector Paddington would really like to just finish up his career quietly but with the Grahams around that doesn't seem likely.

When this final installment of this series opens, Michael is watching over his friend Rohan Wallace who was shot breaking into the home of Alister Crowe, one of the richest men in town whose family was said to have been involved in illegal slave trafficking and stolen treasure.  No one is sure why Rohan broke into Alisters home but they speculate that it has something to do with the lost treasure that is said to still be hidden somewhere in Blackpool.  Alister's family built the town and created a series of tunnels and caves that are said to hold the lost treasure but no one has yet to find it.

Even though I didn't read the first three books in this series I didn't feel lost, there is a lot of background information so that you don't really need to read the others to enjoy this one. The characters are well developed and it was a fun quick read.