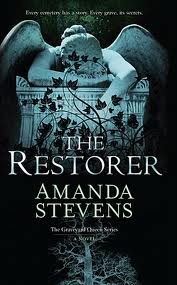 Title: The Restorer by Amanda Stevens

I received this book as an advanced electronic galley from netgalley.com . This book was set to be published April 26, 2011


Synopsis: My name is Amelia Gray. I’m a cemetery restorer who sees ghosts. In order to protect myself from the parasitic nature of the dead, I’ve always held fast to the rules passed down from my father. But now a haunted police detective has entered my world and everything is changing, including the rules that have always kept me safe.

It started with the discovery of a young woman’s brutalized body in an old Charleston graveyard I’ve been hired to restore. The clues to the killer—and to his other victims— lie in the headstone symbolism that only I can interpret. Devlin needs my help, but his ghosts shadow his every move, feeding off his warmth, sustaining their presence with his energy. To warn him would be to invite them into my life. I’ve vowed to keep my distance, but the pull of his magnetism grows ever stronger even as the symbols lead me closer to the killer and to the gossamer veil that separates this world from the next.

Review: I am a total sucker for secret societies and murder mysteries so I was extremely happy to discover that this is the start of a series.  I was sucked in from the beginning which starts out with Amelia as a young girl.  There were a few questions that were opened in this book that weren't brought to a resolution but knowing that this is at least a trilogy I'm hoping that she comes back and gives us answers. For example apparently Amelia is adopted, so how is it that she has the same ability to see ghosts as her father?  There are other subtle things that are just thrown out there that weren't wrapped up.

Amelia has spent most of her life in graveyards, playing in them as a child and now restoring them as an adult.  They have always been a place of quiet sanctuary to her, well except for the ghosts that sometimes lurk around which she was taught never to acknowledge. After a dead body is discovered in a  graveyard she is working in, Amelia finds herself drawn into the investigation and her relationship with the ghosts she sees starts to change.  Her fathers solid rules of how to interact with ghosts don't seem to be working for her anymore and she finds herself on new ground.

I think this was a really great start to a new series.