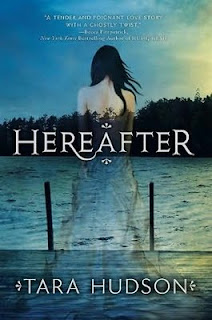 I received this book as an electronic advanced copy from Netgalley.com it is set to be released June 7, 2011.

Synopsis: Can there truly be love after death?

Drifting in the dark waters of a mysterious river, the only thing Amelia knows for sure is that she's dead. With no recollection of her past life—or her actual death—she's trapped alone in a nightmarish existence. All of this changes when she tries to rescue a boy, Joshua, from drowning in her river. As a ghost, she can do nothing but will him to live. Yet in an unforgettable moment of connection, she helps him survive.

Amelia and Joshua grow ever closer as they begin to uncover the strange circumstances of her death and the secrets of the dark river that held her captive for so long. But even while they struggle to keep their bond hidden from the living world, a frightening spirit named Eli is doing everything in his power to destroy their newfound happiness and drag Amelia back into the ghost world . . . forever.

Review: I was drawn into this book immediately. Amelia's plight as a ghost trying to figure out what her purpose is grabbed me from the very beginning.  After she saves Joshua from drowning life become very interesting for her since his near death experience has triggered Joshua's "Seer" abilities.  While his family believes that Amelia is out to hurt him Joshua believes different and its a race as Joshua's family try to excise Amelia's existence and another ghost Eli tries to claim her to help him with his evil plan to steal souls.

I found Joshua a little too accepting of Amelia and her ghostly being but I guess if you almost died you might be more open to something like that. Watching him struggle with having a relationship with a ghost was amusing, since Amelia can't open doors or turn pages in a book not to mention no one else can see her.  Amelia's struggle to adjust to death and figure out where she came from and how she died were written very well.  I really felt a connection with her.  Eli was also well done, and I felt very ambiguous about him.  I didn't really hate him but I didn't like him either.

I found that I really wanted to find out what would happen at the end and was routing for Amelia and Joshua throughout the whole book. Great debut for this author.