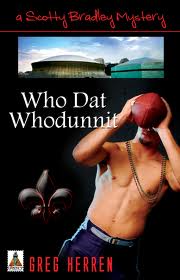 Synopsis: The Saints’ victory to get into the Super Bowl just prior to the start of Carnival season has everyone in New Orleans floating on Cloud Nine. But for Scotty Bradley, Carnival looks like it’s going to be grim yet again when his estranged cousin Jared—who plays for the Saints—becomes the number one suspect in the murder of his girlfriend, dethroned former Miss Louisiana Tara Bourgeouis. Scotty’s not entirely convinced his cousin isn’t the killer, but when he starts digging around into the homophobic beauty queen’s sordid life, he finds that any number of people wanted her dead. With the help of his friends and family, he plunges deeper and deeper into Tara’s tawdry world of sex tapes, fundamentalist fascists, and mind-boggling secrets—secrets some are willing to kill to keep!

Review: I needed something new after reading so many ya romance novels - I guess this is as far away from that as you can get!

I love Greg Herren's Scotty series and in this one we get to meet more of Scotty's wacky family. When Scotty's cousin Jared shows up to a family get together with the country's most celebrated homophobic bigot Tara, Scotty's free thinking mother loses it and punches her in the face. The next morning Tara is found dead and it seems Scotty's mother's gun is the murder weapon.  As the search for who murdered Tara ensues the skeletons in everyone's closet start to be revealed.  There seem to be secrets behind every door and everyone seems to have a motive to kill her, although no one seems to have a motive to frame Scotty's mother.

Scotty's family is from the upper class Garden District but his parents are hippy free spirits who live in the Quarter.  Needless to say they don't always get along.  I love Scotty's parents, his outspoken mother who flies into tirades over injustice, has parties filled with all types of people, booze and pot.  I want them to adopt me.

Fast paced full of wit, humor and colorful New Orleans flavor, Greg scores another thumbs up from me on this one!